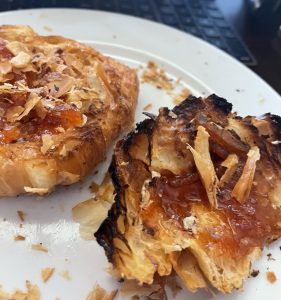 When I was single-mom commuting 80 miles a day roundtrip to grad school for a full day—TA in morning comp classes and my writing workshops at night—I spent a lot of time in a little coffeeshop down from the library. The name I can’t recall but I’m certain it was of the coffeeshop pun variety. Grad students had meetings there and lots of folks popped in for coffee or a cold sandwich for lunch, but I took up residence. I sometimes had 7 or 8 hours between the morning class I TA-ed and that night class. It was too far to drive home and initially I didn’t know anyone well enough to crash at their place in between classes or overnight while my parents took care of the kiddo.

I’ve been thinking about that coffeeshop and that time often lately. I’ve realized the older we get the more we are a swirl of our past experiences and present circumstance. And with two years of pandemic near-solitude under my belt, I’ve had time to think. It is said smell is the sense most associated with memory, but I think taste is vying for a joint throne. And the taste that brought me back to this particular time in my life was orange marmalade on a toasted croissant.

The coffeeshop had muffins and scones and all those types of thing one would associate with the offerings of a standard American coffeeshop/coffeehouse, but they also had these giant croissants. I don’t think they made them on premises. My guess is they were of the frozen food service variety but that didn’t matter to me at the time—or now, come to think of it. Don’t get me wrong, I can definitely be a croissant snob, but at the time there wasn’t much to choose from as far as patisserie baked goods were concerned in that smallish southern city and, let’s be honest here, even a sub par croissant can be elevated by slicing it open and toasting it gently.

Hence, I came to appreciate the toaster-kissed croissant with the tiny pot of orange marmalade they nestled onto the edge of the plate with some butter. Marmalade, the orange kind, as in some languages—I’m looking at you Slovenian—it can mean any kind of jammy fruit preserve, is divisive. Maybe not on the same scale as cilantro but it’s in horseshoe flinging distance. I suspect it’s because of the bitterness from the peels that seeps through the pectined, sugary gel. As someone who loves bitter greens and brassicas of all kinds, I also love that bitterness in my marmalade. Anything without it is, in my opinion, orange jam.

And here’s where things slide off the rails into some possibly over-aggrandized metaphor. Marmalade is bittersweet, like quality chocolate, like life. “This too shall pass” gets us through the hard times and makes us wistful during the best times. “This too shall pass” is a softer English memento mori. And for me marmalade is a little bit of that too with some Proust-ian madeleine thrown in for extra-aggrandized metaphorical purposes.

So I’ve been savoring my tiny batch of blood orange marmalade made with seasonal oranges from the farmers market on some killer local croissants, knowing the marmalade will run out, that only crumbs will remain on the plate—at least until the cat finds it—and that this time of figuring out how to re-emerge into society from the solitary, feral state I’ve inhabited over the last two years into whatever this after-Covid world is will pass, just like those long days sitting, looking out the window of my coffeeshop haunt worrying about my future, worrying I was being a bad mom and a bad grad student and probably a bad daughter have passed. And somewhere down the road, orange marmalade will make me think of grad school and the aftermath of moving across country in the middle of a pandemic and whatever new experience I’m having in context.

*Why, yes, that is a line from “Bittersweet” from Big Head Todd and the Monsters.