This is an edited repost from my previous blog ars culinaria. It originally appeared in January 2010 but still captures my feelings about Twelfth Night and midwinter. 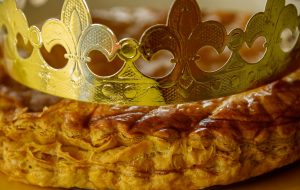 The old winter season of merrymaking kicked off on All Saints’ Day in November and lasted straight through to the largest, most extravagant feasts held on January 6th, Twelfth Night. Industrialization ended the extensive celebration of Yuletide, though Oliver Cromwell and the Puritans tried to stamp it out earlier by banning Christmas.

While it lasted, the general order of things was turned on its head: peasants were lords, play was the work of the day, and special foods filled every groaning board. Fallow fields meant little agricultural work had to be done. Masked balls and pantomime plays entertained everyone from the King to the street urchin. Carolers sang at neighbor’s doors with the expectation of food, drink, or coin in return. Bonfires were lit to protect livestock and orchards were wassailed. Loved ones exchanged tokens of appreciation. Those who could gave food and clothing to those less fortunate.

Many of these traditions were held dearly enough to be shifted to other single-day celebrations. The elaborate Twelfth Night cakes and tarts with gold coins baked inside migrated to Christmas. Halloween claimed the masked balls and begging door-to-door. Pantomime survives in Britain. And Epiphany, Twelfth Night’s more religious moniker, is still as an important observation on the Roman Catholic calendar. Special cakes are baked and children receive small gifts in celebration of the Magi’s adoration of Jesus. Epiphany also marks the beginning of Carnival, its own extended party season.

In the rush of our modern lives when some of us work right through Christmas Day, the thought of even a twelve-day holiday, let alone months of celebrating, seems like a ridiculous endeavor. Unlike our agriculturally-minded forebears, we don’t get a whole season of downtime. But I do think there is something to be learned from the history of these extended holidays. They revolved around spending time with family and friends. Whole communities came together to celebrate the rebirth of the sun or the birth of a savior. We may not believe as our forebears did, but we can choose to make all the midwinter celebrations of light our own time of re-centering, recuperating, reconnecting, and reveling.